As I've progressed through the Outer Order, I've found myself drawn more and more into Enochian work. This probably isn't suprising, as we incorporate Enochian into just about every ritual that we do-but that doesn't necessarily guarantee an understanding of the Enochian material. The more I come to understand about it, the more I believe it to be the pinnacle of Western evolutionary Magic. We incorporate elements of the Enochian in our elemental, Zodiacal, and Planetary magics-from what I've experienced-mostly to increase their power, or augment their "tuning" to the force being worked with. Our rituals (at least in the Outer) seem to be a fusion of the Qabalistic root rituals with Enochian elements-the equivalent to adding nitrous to a fuel engine in order to boost it's performance. This is valuable because our Qabalistic based rituals give us a foothold into both Theurgy and Thaumaturgical/practical magic. The only telesmata involved in Enochian magic (from my limited experience) are the tools one creates in order to practice the Aethyric magic. Enochian magic in practice as delivered to Magi Dee and Kelly is, in my opinion, purely Theurgic.
Where Enochian magic seems to stand as it's own system is in the Aethyric Magic, through which one can rise through the varying levels of existence. This is invaluable because it gives you a chance to "level set". One can only scry as far as one's own development allows; attempting to penetrate the veil of an Aethyr higher than you've developed is an excercise in futility. The Angels within the Aethyrs communicate and with you on deep levels, and provide you with the Keys necessary to advance into the Aethyr. This is the method I plan to use to enter into full communicaiton with my HGA, when the time is right. We have a channel open, at the moment, but I do not have the full conversation as granted by the Abra-Melin operation. I feel more drawn to the Enochian work, and my intuition tells me this is the method that I must use to make that vital connection. I've learned to follow my intuition. 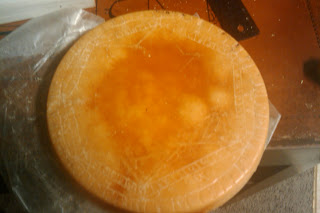 My Sigilum Dei Ameth, while it was "in Progress"
I've worked through the Practicus curriculum, and will (hopefully) be working through the Philosophus soon-I'll be entering this grade with a deeper understanding of the Tablets and Enochian magic through the practice of Enochian Elemental Magic, which seems to mostly consist of scrying the Elemental planes.( I want to keep within the grade structure in my studies, and approach each of the elemental forces in turn and balance them before undertaking Aethyric magic in earnest. At this point-assuming my tutor agrees with my assessment-I'm on my way to working Fire, and can now approach any of the Elemental forces without getting off track, curriculum wise. )

My Table of Practice
I think it is important to understand that Enochian Scrying isn't a passive reception of images-the energetic body of the Theurgist is actively affected and evolved during these scrying sessions, often by the Angelic entities encountered during the scrying. Enochian Elemental Magic-as opposed to our Qabalistic Elemental Magic- involves active communication with the entities representative of the powers. 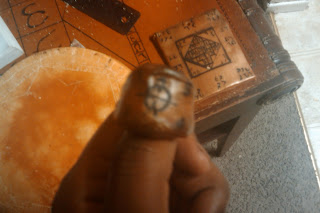 My Ring and Lamen....yes, made of clay, not gold. Gold paint seems to be working just fine, However!
The advantage to that, in my opinion, is that you get a direct transmission of understandings (the thought-bomb gnosis that Angels seem to prefer when communication with humans....well, this human anyway) and access to an instructor in the nature of the force. This is the difference between learning something from studying, and learning something from an experienced teacher. There are subtleties that are often communicated by another intelligence that one may not draw out of the book without that experienced other's help. I've found my own scryings with our Outer Order rituals to be absolutely invaluable....and that I've internalized lessons best when I've been gently nudged to look at things differently by a more experienced teacher.

Anyway, just wanted to share a bit about that. A quick note on the Sigillum...not easy to make! Mine is not perfectly symmetrical. To get around that mental block, I printed a perfectly symmetrical version out on paper, laminated it, and glued it to the bottom of my personal and imperfect wax Sigillum. This way I've got the perfect representation of the Universe, and the power of a personally created Talsiman. Gotta be creative, as I can't spend $300 on a fancy artisan made one!