So. The writer states (in summary) quite early in the book that his aim is to revitalize alchemy in the UK.

I don't know why he's leaving it at just the UK. This book has the potential, assuming you all aren't a bunch of lazy gits, to revitalize modern alchemy *period*.

I've been an alchemist for some time. Well past the decade mark. I legit spent the first half of that in a state of near perfect confusion. No two books were alike, no meanings the same, progress was near glacial. I grew in understanding in the way a paleontologist does, slowly brushing off old bones in hopes of revelation, unable to move quickly for fear of screwing up the whole mess. I had to learn the hard way, to study spagery in Orders and then of course the laboratory. I worked Junius, I studied Philalethes. From the Golden Chain on down to modern works. Spent roughly eleventy-billion dollars on glassware. What you end up with is an understanding that there are a thousand methods, but one "Way" that is alchemical. There are certain processes that shine with the light of truth, that are consistent in all the works of the operative alchemists. They are rarely explained in such a way that it is easy to grasp. There is rarely clarity. 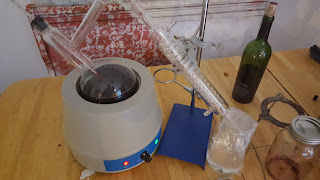 Clarity usually only comes from moments of Gnosis; the right line read from a dusty old book combined with an ongoing operation and a *moment* when they shine together. I remember when I first understood, in Emblematic form, what the Toad and the Eagle within a vessel at once meant. I meditated upon the image, and thought about an operation I had ongoing at the time, an elixir of Garlic I was preparing. I'd reached the point where once makes the spirit fly to join the washed Salts (heating the "mercuric" solution in the retort, so that it rises in steam and moves to the other vessel). I remember thinking, there goes the "volatile" sulfur, and looking at the "fixed" salt, and thought" .....!!!!....AHHHH. That's what the bastards are talking about!" Then looked back upon the emblem, saw the Toad and the Eagle, and what had once been a pretty picture was now opening like a flower to reveal it's wisdom. When the Language of the Birds was first truly graspable for me.

Well. Wish I'd have had this book.

Heliopholus is very gentle in his use of obscuration; he does just enough to drive the reader toward self-discovery, without creating walls out of blinds, or misleading. This is, in my opinion, the only sane or sensible way to teach alchemy. His reading and understanding of Paracelsus are internally consistent. That alone makes the book a golden one. Heliopholus is well-named.

Often modern authors go to great lengths to separate Spagery and Alchemy; Spagery done to completion is Alchemy, and spagyric processes are alchemical processes. Spagery is just specific to plants--what makes a thing a work of Al-chemy is the process, not the nature of the First Matter used. We don't have a separate name for the mineral or animal alchemies, and perhaps we shouldn't. Spagery should bear a badge of honor, for the finest medicines come from the Plant kingdom. Always have. Don't consider Spagery a lesser art; instead, it's a less dangerous and in most cases *more useful* art, as it's medicines can generally be consumed safely and by folks of all ages (who aren't allergic to the root Matter).

I would recommend this tome before Junius. Before the work of Dubois and the Philosopher's of Nature. Yeah, I said that. You know why? This will make it possible for the aspiring alchemist to deeply understanding the older works. It will enable deeper engagement. This book is a Mercury of sorts, a Crossroads-spirit for folks who wish to open the roads of alchemy.


I've, for the purpose of working this book, made an elixir of Lemon-balm using Heliopholus' opening of Paracelsus' process. While alchemy is alchemy, there were some subtle differences to my own process that I found quite interesting. The elixir in the end is quite potent, thoroughly alchemical and an excellent medicine.

This book will join the my own offering on Lambspring, Junius' Plant Handbook, and the PoN course as standard reading for my alchemical students, and recommended reading for my peers. It is a classic. If you are at all interested in Alchemy, you simply must have it and read it. The light shines bright inside, with the only obfuscating clouds providing helpful shade instead of storms of confusion. Go buy it. Buy it twice, once for working, and one to sit pretty on your mantle. I simply cannot recommend it enough.