Opening the Book of Lambspring

Hadean Press has just published a pamphlet I've written which serves as a solid introduction to internal Hermetic alchemical thought. In "Opening the Book of Lambspring" each of the emblems is delved into, in a straight-forward and clear fashion. It's a great deal at only 3 pounds,and makes for interesting reading for alchemy-loving folk. Even the well-versed in alchemy may find it interesting;they could rant about how their reading of the emblem is completely different than mine, and get a few quality "harrumphs" or grumbles in....which is an important part of the alchemical tradition,haha. Anyway, go buy it! You will definitely enjoy it. 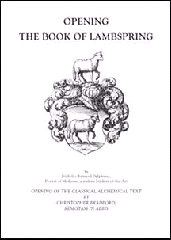