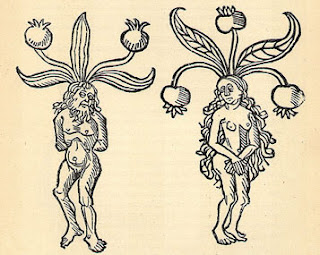 So....this is something that's always bothered me a bit, which I'm going to go ahead and address now. There is a consensus in the Golden Dawn that all use of intoxicants or entheogens is completely negative and terrible, and will result in horrid and deleterious consequences like possession, a weakening of the will, service to the Old Ones and the rising of Great Cthulhu......you get the picture.

I think there are a couple of reasons this is so, and I think that unfortunately they are not primarily based on effectiveness in Magic.  Because Golden Dawn Magicians use entheogens pretty often (mostly unaware that they are doing so, much in the way Roman Catholics are unaware of the Ceremonial Magic they witness once a week) and there is a long standing tradition of doing so in the Western Mystery Tradition.

Within my Order we teach that using intoxicants as a substitute for discipline is unacceptable, and with good reason. My superiors within the Order are quite clear on this, and in this case I completely agree. It is best to learn to acquire magical trance states through meditation, will, and discipline as much as possible. I teach this to my students, because it is true, and it is safer for them. Many entheogens can be poisonous if consumed unwisely.

While I was thinking on this subject the other day, one of my students asked me a question about Spagyric Alchemy, and I taught him what I knew. I encouraged him to commune with the spirits of the Plants, to consume carefully prepared Tinctures and Elixirs.... and then thought about what was truly happening. An Elixir is an Entheogen, period. An entheogen is a psycoactive substance used in ritual or spiritual context.(http://en.wikipedia.org/wiki/Entheogen). If your Elixir isn't psychoactive, you aren't doing it right.

What we are doing is little different from what the Shamans/Priests who consumed (in the proper magical fashion, and not the purely entertainment based way that entheogens are often consumed in America) and communed with "plant spirits" in the form of Peyote, Salvia, Marijuana, or Alcohol did in our past and present.  Frankly it is not different at all; we just have a tendency to use plants that  have less spectacular immediate effect; and that's only the modern way. We Western Magicians have a long tradition of using certain entheogens in magic--see henbane, belladona, mandrake, Syrian rue...the list goes on and on. I tend to think of the use of entheogens as akin to the the use of vehicles. (Time for a lengthy analogy!)

Yes, you absolutely must be able to travel on your own legs when possible. If you over-rely on your car, you will face consequences that are disastrous to your long-term health and ability to travel under your own power (such as weight gain, loss of athleticism, health risks...etc).

It is the same with trance work and magic. If the only way you can attain a magical trance is with the use of incense, or consumption of a plant-spirit or other tool, you will be less able then if you can attain trance through breath and mind alone.

That being said, there are some places that are very difficult to reach without a vehicle. I could walk and exercise regularly and still have no chance of reaching the Bahamas under my own power. Sometimes you have to buy the plane ticket.

...and while most people travel safe, every now and again a plane goes down. There is risk in traveling, and greater risk in traveling in faster vehicles. An Elixir made with Garlic may be equivalent to a fast bicycle, and one made of Peyote may be a rocket ship. You can get to the Moon with the rocket, but not everyone makes it back. Neither Magic nor Travel are risk-free enterprises.

In my own magic, I am perfectly capable of deep trance states through breath and discipline....but they do not begin to compare to what I can attain with the aid of incense, a properly outfitted temple, candle light and some tools. We have these technologies for a reason. They work. Entheogens are powerful vehicles, and their use as a magical technology is as old as man. I was going to state that I've never used an Entheogen in Magic, but I've been using Spagyric Elixirs for years, and to great effect.

The use of Elixirs and Tinctures in Spagery aren't done to replace the discipline of meditation, but often tune the meditative faculties of the Operator toward the forces that are inherent in the plants Nature. This will result in Visions and often subtle communication. I stand by this as both traditional, good, and necessary. We are careful to use mild plants in Spagery, and that makes for responsible and mostly safe use of entheogens....in my opinion.

A real problem here is that competition between Golden Dawn Orders makes it difficult to have a nuanced stand on controversial things. It is easy to take something like this and twist it out of context.....rest assured that  if I were to say that we did any less than prohibit the use of entheogens in our Order, competitors would shout from the roof-tops that "Griffin's Golden Dawn Encourages Drug Use!!!111!!!1", and we would never hear the end of it, despite that being completely untrue.

I wish we could present an official, nuanced stand on this matter. Instead we MUST teach our students to avoid these things no matter what, and are leaving a big chunk of our heritage on the threshing room floor.

If you want an example of why, take a look at all the foolishness surrounding our addressing the Sexual Mysteries in the recent past. I've never seen so much breathless, foolish commentary.  This is a real problem, and an example of why public discord between Orders can result in a stifling and constraining of magical knowledge. We seem to be moving in the right direction, which is good, but there's a long way to go.

There is also the serious matter of health issues--imagine if I were working with one of the more dangerous western Plant Spirits like henbane, or belladonna, and injured myself through unwise consumption? Where would that leave the Golden Dawn, if we taught people to use this and it were part of the curriculum? Nowhere good, I can tell you that. We have to think of the safety of our Fraters and Sorors, of course. In this modern day and age, there are real liabilities and risks that older hidden Orders didn't need to worry about. The modern Order is often a corporation, it can be sued. In the past, there was nothing to Sue-the Order existed as an egregore and association, not as a public entity within the grasp of Law. An order that gets sued out of existence teaches no-one anything...except by example.

I'm not exactly sure where I'm going this....I just want to encourage some thought and conversation about this matter. Every single Golden Dawn order that I know of absolutely prohibits the use of Intoxicants in Magic (my own included), and they also all practice some form of Spagery within their ranks. It's interesting.