The Golden Dawn as a School of Magic

I've had an interesting last couple of weeks; I've been doing a fair bit of energetic exploration (although not enough full on ceremonial), and have found myself in a bit of an odd place. The vast majority of the Magic I perform at this point in my life is informed by the Golden Dawn, but not actually the traditional rituals. My rituals for raising and balancing the LVX  are rooted in the visual/vibrational method of the Middle Pillar, but aren't actually the Middle Pillar. My ritual for summoning the Archangels and gently invoking the balanced Elements is rooted in the methods I learned performing the Lesser Ritual of the Pentagram, but again, are not actually the Lesser Ritual of the Pentagram. Hardly a single ritual has been left unscathed in my personal practice. Although I've evolved my personal system in directions  that are improvements for my own development and system of magic, I recognize the rituals I learned from the Golden Dawn as foundational to my practice.

When I first began making small changes, I felt a definite pang, as if I were insulting the tradition by presuming it could be improved....and I was concerned it reeked of ego. Who am I to change these rituals? I was lucky to know them at all, haha. This lasted for some time, but didn't stop me. Because as I changed and grew, the rituals I used in my evolution needed to change as well. So. Despite my misgivings, I did what needed to be done. Suprisingly, this was not always a change that led to increased complication; I found that once I could enflame myself at will, simpler rituals were more efficacious than the drawn-out lengthy ones, as I learned to recognize the delicate balance between trance states and ritual required for true and effective Spiritual magic. (Learning this balance is also key to powerful Conjuring and Divination! Unsurprisingly, it comes quite naturally to Folk-Magicians and Conjurers, who seem to mostly learn through performing Thaumaturgy, and spend little time in meditative states.) I learned that spontaneous invocations and invocations pre-written by the Operant were far more effective than those read from a manual and written by another Magician. 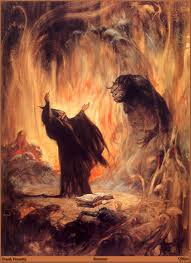 I had to change my perspective. I'd been seeing the Golden Dawn as a sort of Orthodoxy; I'd always thought it important not to alter the foundation rituals, and to teach them as accurately as possible to our new students. I still believe this is true, but not just because. I think it is necessary for them to learn these rituals because it is teaching them how to perform magic. They aren't supposed to be the only Magic our Magicians ever do. They are the foundation. The Arts of Invocation, Prayer, Incantation, Vibration, Visualisation...all of these are covered by the basic rituals, and repeated performance of the rituals takes you to a point where you have Gnosis of how to perform the Art of Magic. You understand what the different structures/movements/states are for, and learn how to craft them yourself. Not just intellectually, which is useless, but intuitively and emotionally as well. Personal innovations shouldn't be undertaken until the student has, in my opinion, evolved their introspective and divinatory abilities enough to perceive and understand the effects their Magic will have on their lives.

This is part of why I find there to be little danger (but much sadness) in the profanation we've experienced. You could memorize the profaned documents, and if you weren't a Magician (and not a person training to become a Magician...there is a line that is crossed after some experience is gained that has nothing to do with Grade or Title) they are absolutely meaningless. How many non-GD Magicians have had success with the Z-2 formulae, for example? (Ha....how many actual GD Magicians have, at that?) The crowning stone of the entire  Order, as far as Ceremonial Magic is concerned, and I would bet that the vast majority of GD Magicians haven't touched the thing, and don't quite understand it irregardless. It takes deep study and practice to grasp the flow, the Spirit of it. It's not enough to give it a try once, you have to get in there deep. To do that, you have to have a grasp of the symbolism inherent to the Neophyte ceremony, and that takes study and meditation as well. It's somewhat like if someone left the plans for a nuclear weapon in a Starbucks. There aren't a whole lot of people who would know what to do with it even assuming they new what it actually was when looking at it. There is, of course, the problem of the damage down to a carefully nurtured egregore by persons hijacking it's ritual and symbol set. (Take a look at the Fylfot Cross, for instance, as an unpleasant but perfect example). That just plain sucks.

Anyway, I think it's important to see the Golden Dawn as a system training people in Magic. A GD Magician isn't limited to just GD ritual and magic....perhaps this is obvious to everyone, but I think the focus on doing the rituals perfectly and unwaveringly in the early years of practice might lead one to think otherwise. No one expects an